History of the Sɛ (Shai) 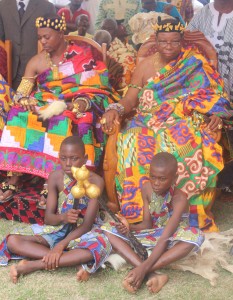 The people of Sɛ (also known as Shai) are one of the eight Dangme tribes existing in South Eastern ghana. They Migrated from Isreal and settled at Sameh in Nigeria between the two rivers Kuala and Efa. They later moved from Sameh to Oyo, to Abeokuta and then to Dahomey which is now Benin. From Dahomey they moved to Tado and then to Ngotsie in Togoland. At Ngotsie the people of Sɛ were under the leadership of an Ewe king called King Agorkoli. King Agorkoli and his warriors mistreated the Dangmes.

During this period of maltreatment an old woman appeared to the Dangmes and advised them not to pour their waste water outside but to pour it under the walls surrounding Ngotsie. They did this for a very long time and whilst they poured the water they continued to chisel the soaked walls to create a very big whole to escape the treatment of King Agorkoli. The old woman also advised them to send warriorsto survey the entire land and see if they can get a hide out should they escape from King Agorkoli.

The Warriors came back to inform the Dangmes that the way was clear and that they can escape for King Agorkoli and his warriors. The Adas lead the way from Ngotsie. Whilst they were leaving the Old woman distracted the King by engaging in long discussion and singing melodious Klama songs which made the King loose his memory. The King after a while realised that activities in the palace were at a Standstill. He then called his military me to search the living quarters of the Dangmes and see what was happening. To their surprise they found the whole place empty. King Agorkoli went to confirm and when returning to his seat to address the old woman, he found that the old woman was also gone. He assembled his men to go after Dangmes.

They then settled on the Tagologo lands. This unknown woman also introduced the Dipo (Puberty Rights) to the community. She disappeared on day and a snake was found. To this day they honour Nako (which is the name of the snake found). The Klo people call her Klonako and worship her. The Klo people also worship Kɔle (The Eagle) and give names like Korle, Korletey and Korlekie to their children.